We bring exciting news that Carolan has acquired some siblings, although you would be hard pressed to spot the family resemblance.

The Carolan team has been collaborating with Andrew McPherson and his group at the Augmented Instruments Laboratory at Queen Mary to explore how we might decorate other musical instruments with their life stories. This is part of a new five-year research project called FAST that has been funded by the Engineering and Physical Sciences Research Council to explore new forms of digital music object.

Andrew’s lab creates new musical instruments and also augments traditional ones with sensors, new types of sound production and new ways of interacting. A lovely example of Andrew’s previous work was to augment traditional piano keyboards with capacitance sensors so that pianists could naturally create vibratos, bends and other effects by moving their fingers on individual keys – an idea called TouchKeys.

In a quite different vein, their recent work has been exploring the design of ‘hackable instruments’, new forms of electronic instrument that while superficially simple, can be opened up and radically modified – ‘hacked’ – by musicians to create highly personalised instruments and performances. An early example is the D-Box, an electronic instrument that can easily be built from scratch and whose innards can be messed with in all sorts of ways without frying the circuitry.

This inherent hackability may lead to individual D-boxes becoming associated with rich histories of how they have been modified and used to create particular sounds and performances. This prompted the Carolan team to ask whether we might decorate D-Boxes with interactive patterns and so enable their owners to document and recall the unique history of hacks associated wih each instrument?

We hosted a workshop at the Mixed Reality Lab to build some D-Boxes and design some Artcodes  (the new and more friendly name for Aestheticodes) that might be used to decorate them. First we assembled our D-Boxes …

Then we spent some time sketching Artcode decorations for them …

After the workshop, Adrian from the Carolan team designed a series of Artcode D-Box logos, a distinct one for each of six instruments. These were laser-etched and cut into the wooden sides of our D-boxes to create a family of instruments that can be scanned with a phone or tablet to read and update their individual blogs.

Our family of six D-Boxes, each inlaid with its own distinct Atcode

We are looking forward to releasing these D-Boxes into the wild to see where they might go, how they will be hacked and also how their interactive decorations might help maintain their histories.  Perhaps Carolan might even get to meet its new siblings? Anyone for a D-Box and acoustic guitar jam? 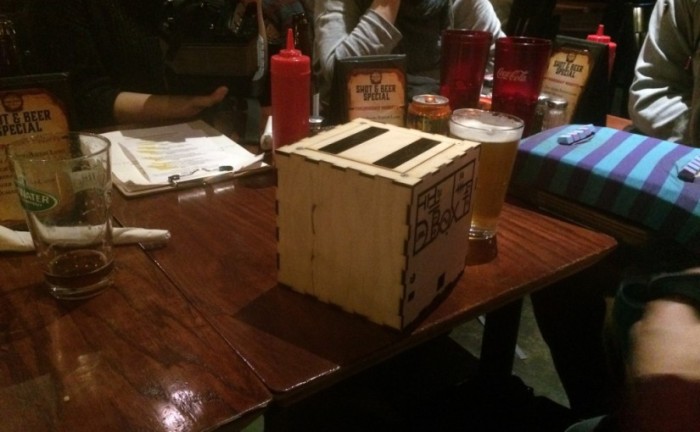 A D-Box spotted in the wild