It is part and parcel of a guitar’s life to be on the road, whether being carried in a gig bag to a local session or packed in a flight case and shipped between countries when touring. Many players will be familiar with the dilemma of how to travel with a guitar, especially when flying. One option is to check their valuable instrument as hold baggage, packing it snugly in the strongest flight case they can afford and hoping that it emerges in one piece from the baggage handling system. The other is to try to take it on as hand baggage, either through the rock star route of buying the guitar its own ticket (ideally First Class) or alternatively, packing it in a light gig bag and trying to pass it off as hand baggage (a high risk strategy as a soft gig bag then becomes the nightmare option should the attempt fail and the guitar end up being consigned to the hold). Then there are the travails of road travel, bumps and bangs or the extreme temperatures or that might be experienced in the boot of a car in a hot climate.

We’ve been experimenting with adding sensors to Carolan’s kit of accessories to help document it’s life on the road, offering a guitar’s eye view of its travels. The first is a small Autographer camera (below right) that can automatically capture thousands of photos, along with GPS coordinates, automatically triggered by movement and light levels. The second is an Affectiva Q Sensor (below left) that can be strapped on to the guitar so as to record accelerometer, gyroscope and temperature data for up to thirty hours at a time.

We tested out the capabilities of these sensors during Carolan’s recent US road trip. Temporarily mounting the camera on a velcro inside the instrument delivered an unusual guitar-eye view of the world, capturing unusual images of the places it visited, and people it met. The movement-sensitive aspect of the camera gave Carolan the endearing quality of capturing when people were inspecting it closely as well as playing it. 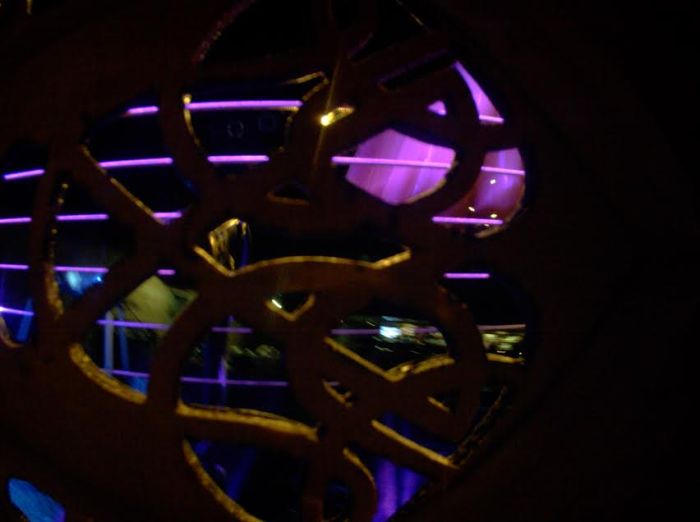 We used these photos, along others  captured by travelling Carolan’s companion, to annotate movement and temperature data from Carolan’s flights between the UK to the US. This was an especially intriguing prospect as Carolan was checked into the hold during the outbound flight but got to travel as hand baggage on the way back, being stored in a cupboard on the top deck of a 747.

You can interactively explore the data for yourself courtesy of Dr Paul Tennent of the Mixed reality Lab who has created two interactive visualisations (outbound and return) available at this link. You’ll need to be patient thought as there is a considerable amount of data here so that the webpage can take a long while to load! For the less patient among us, here is a quick overview of the outward bound leg. The red green and dark blue traces show the accelerations measured in three axes of movement while the light blue trace below shows temperature. We have annotated the traces with various photos taken during the trip to help explain where Carolan may have been at any specific moment.

Clearly, we have a large hole in our data. Airline policies require lithium-ion battery powered items to be powered down when in the hold, so we are unable to report what happens between the point it entered the baggage system to its ultimate emergence on the other side  (though can use the accelerations experienced by the passenger during the flight to approximate those of the guitar which is what is shown in the model block of data). So we are unable to answer that most pressing of questions – what happens to my guitar in the baggage system? We can however, draw a few tentative conclusions from this somewhat less than scientific first . First, the accelerometer data suggests that Carolan may experience the greatest accelerations (and hence possible movement stresses) when it is being carried by hand, picked up and set down. Next, in terms of movement stress, would appear to be being driven, while the gentlest is during the flight – even during turbulence. So perhaps the real question is whether baggage  handlers are more gentle with guitars than their owners are when carrying them? Any guesses?

Our second test is a little more conclusive. We leave the QSense in Carolan’s Hiscox flight case in the trunk of our hire car during a day trip to New Orleans. Luckily we removed Carolan from the case before this test as temperatures rise from a modest 22C as the start of the trip to a frightening 41C during the heat of the day before falling again. This is a pretty significant shift in temperature that would surely affect tuning and possible even structure if repeated over long time periods?

Other than having fun with sensors, what else might we conclude from these early tests? Clearly, the digital footprint of a musical instrument might also include information about environmental conditions and everyday stresses and strains. Guitarists are already familiar with a plethora of devices to protect their instruments, from flight cases to dehumidifiers. Perhaps there are possibilities for augmenting guitars and their cases with sensors that alert owners to risky and potentially damaging behaviours?

One thought on “49. The View from Inside”