Back to the smoke! This time Carolan has ascended the BT Tower!

North London’s iconic landmark with its revolving top and stunning views over the city hosted a celebration of the tenth anniversary of EPSRC’s Digital Economy research programme. It was a chance to catch up with old friends, see some cool projects and demonstrate Carolan, including its new Muzicodes mode where playing simple musical phrases conjures up information (see Post 61). 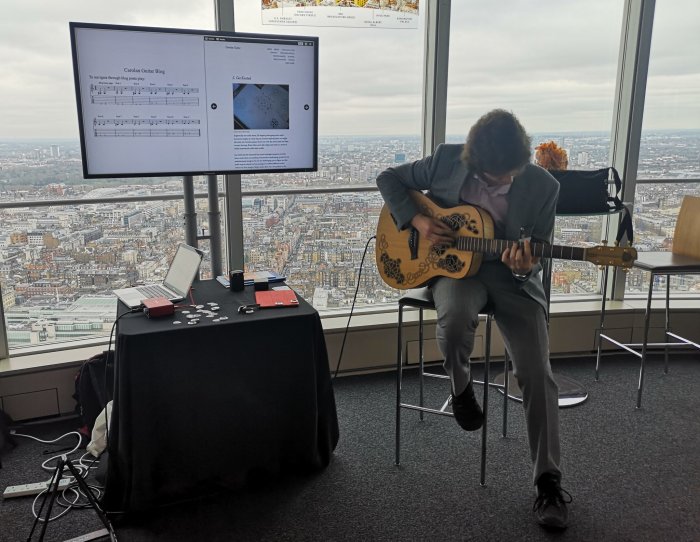 Thanks to Juan Martinez Avila (PhD student at the Mixed reality Lab who is researching interactive guitars) for making our Muzicodes demonstration. Juan crafted two interactive experiences. A musical score was provided on the left side of the screen to guide the interaction with the musical instrument and content was provided on the right side each time a triggering musical phrase was performed. The first experience involved playing simple repeated two-note codes to conjure up different blog posts on the screen. So as guitarists ‘ascended’ through a scale so the blog posts progressed through the blog.

The second involved playing simple musical phrases from popular songs to trigger the playback of YouTube videos that the guitarist could then play along to. So, when one of the musical phrases was properly performed its corresponding video would start to play.

It takes a little time to get used to the feel and response of the system, but with some practice a player can now play Carolan to interact with its footprint and can even weave these simple codes into longer improvised passages as part of a performance.