Modding seems to be a hot topic in the guitar world right now with players looking to upgrade, adapt and generally experiment with their guitars. A while back, Carolan spent some time staying with our friend and fellow guitarist Patrick Shore, who took it on a bit of a tour around his local clubs, including Bingham Folk Club, The Reindeer at Southwell and Keyworth Guitar Club among others. 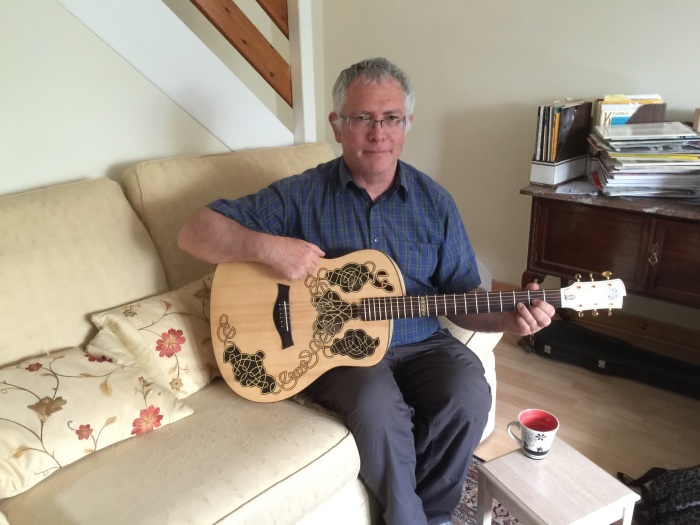 When it was time for Carolan to depart, Patrick raised an unusual request – could we decorate one of his guitars with Carolan’s interactive patterns? The guitar in question was an old nylon string instrument that Patrick had picked up second hand. The guitar was in an unplayable state at the time, but Patrick was looking to restore it to working order, which also provided an ideal opportunity for some decorative ‘modding’.

Working with a battered old guitar raised questions about its history. Who had brought it, played it and perhaps even cherished it? Perhaps someone had first learned to play on it or maybe it had passed through many hands? We’ll likely never know, but now we at least have a chance to continue its story and also connect it to Carolan’s.

The immediate question was how to best apply interactive patterns to an existing guitar? Etch them? Draw them? Or glue them on somehow? Following experimentation back in the lab we alighted on a plan to add two codes to this old guitar.

The first was to add a scratch-plate to its front. Our design involved a mahogany veneer with the Artcode design inlaid with a maple veneer as shown by the following mock up. While a wooden scratch plate is  somewhat unusual, we were confident that this would work well in our laster cutter and could look stylish too.

The second codes is on the headstock. The plan here was to etch Artcode logo directly into the wood and then inlay the code design. 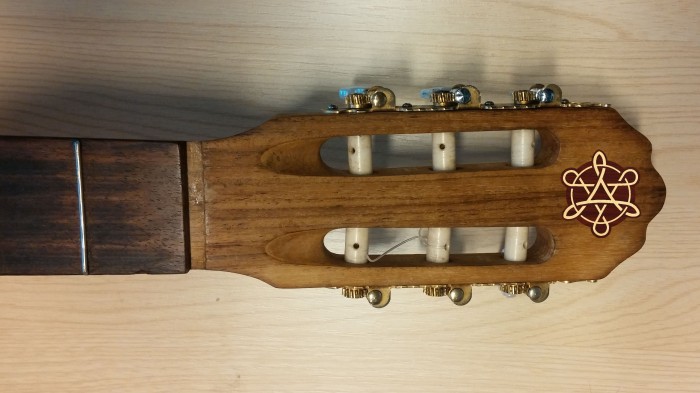 We were pretty nervous about laser cutting the headstock as the settings used to determine the depth of the engrave are different for every type and density of wood meaning we could not precisely test the laser engraving onto the actual headstock before doing it for real. There was a risk that we will get it wrong and either cut way too deep or not deep enough and if the guitar moves out of place during the process we would struggle to engrave it deeper. In the end, we manage to estimate appropriate settings at the headstock etching was a success, allowing us to inlay a scannable Artcode.  Here’s  the finished article showing both headstock logo and scratch plate.

Patrick can now scan his guitar using the Artcodes app to read Carolan’s history, or reconfigure the app to connect his guitar to his own media. All of which raises the further question of how should similarly decorated guitars share information? What might be the benefits of connecting your guitar to someone else’s in this way? …