We’re thrilled to see the launch of Carmina’s new album Landmarks, especially as its title track is so intimately bound up with the history of the Carolan guitar. Carolan visited Rob and Pippa back in April 2015 and took part in a songwriting session during which its unusual decorative patterns inspired a new song themed around musical memories and tatoos. We were fortunately enough to be able to document the birth of the song, capturing a video of Rob and Pippa playing it and grabbing copies of early lyric and chord sheets.

Carolan was also present at the first every public performance of the new song at the Maze in Nottingham back in January of this year.

The next connection between song and guitar arose from an invitation to join Carmina at Real World studios to lay down a guitar part on the recording of the song for the album as reported in our previous post.

Things then turned full circle as three of Carolans Celtic knotwork Artcodes were included on the album artwork so that it can be scanned to connect to bonus materials – including this blogpost! 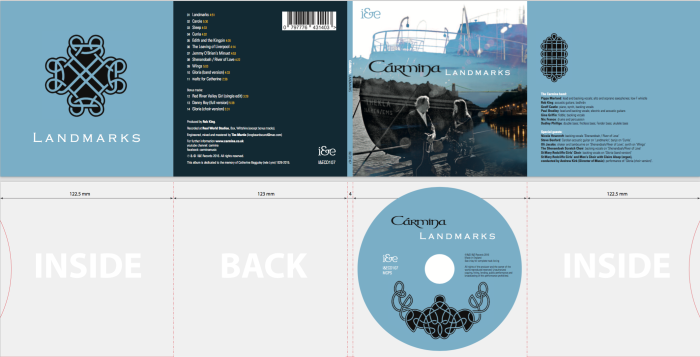 All in all then, a complex tale that charts the journey of a song and a guitar and that reveals how technologies such as Artcodes can inspire and help make connections between songs, instruments, performances and musicians and between digital materials and physical objects and locations as part of a complex and evolving network of musical materials and stories.

You can order a copy of Carmina’s new album Landmarks from their website.

One thought on “58. Written on the Body”